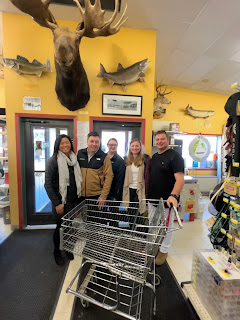 Supermarket Sweep was a television game show first aired in the 1960s. Contestants were followed by cameras as they ran through a supermarket grabbing items off the shelves to get the maximum dollar amount in the cart.

The leadership team of Bluefin Bay Family of Resorts resurrected the concept as part of their staff recognition efforts this year. The five member team, led by General Manager James Taylor, were looking for ideas earlier this year to reward their valued employees while supporting local businesses.

The names of all 105 employees then went into a hat and the winner of the drawing, Evan Dunn, a restaurant manager at the resort, won a “Supermarket Sweep” at Buck’s Hardware in Grand Marais valued at $1,000.

On Wednesday morning last week, Evan and the Bluefin crew descended on Buck’s to complete a three minute shopping spree. A camera followed the determined Dunn as he ran through the store picking up gear for his deck redo that included a gas grill, outdoor carpets, and a hammock along with numerous household and hardware items. He was cheered on, and sometimes helped, by co-workers and the Buck’s Hardware crew.

“It even surprised us with how excited everyone got,” said Taylor. “Even the Buck’s employees were excited. There was lots of giggling and general mayhem.”

After filling three shopping carts and a flatbed in three minutes, Dunn headed to the cash register. His haul was over $1100 so some items had to go back. “When I only had 30 seconds left I just started grabbing things,” Dunn said. “I didn’t need some of the stuff for my deck project so it was easy to decide what to put back.”

Dunn, who has been with Bluefin for less than a year, came to the North Shore from a resort in Colorado. “I love it here. The management is great. It’s like we're a family,” he said.

Taylor is delighted with the results of this staff recognition effort. He isn’t sure how often they’ll do these, or what other rewards they may do, but he believes in recognizing his staff--especially in the trying times of Covid and staffing shortages.

Employment at Bluefin is expected to rise from the current 105 people to over 130 this summer.

Video of Evan’s sweep of Buck’s can be found on the Facebook pages of both companies.