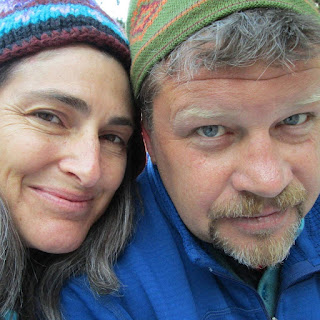 After decades of travel and exploring around the world, Tor and Siffy Torkildson now make Hovland their home. The couple has lived in or explored almost every country on the planet and have shared some of what they’ve seen and learned about the people and places in two curated anthologies, “The Walkabout Chronicles” and “The Pilgrimage Chronicles.”

Both of the Torkildsons grew up in Minnesota. They met a couple of years after college graduation. Tor had returned from his post-college wander around the world. To kill some time he went with a friend who had a job interview with the National Park Service. While hanging out, waiting for his buddy, Tor was asked by a Park Service employee if he’d like to interview for a job. With nothing else going on, he took the chance to interview and was offered a job at Glacier National Park. And there he met Siffy, where they worked the season together and became hiking buddies.

They went their separate ways after that but reconnected 11 years ago. They’ve been together ever since.

Spending time in his formative years, watching ore boats and salties cross the horizon from his uncle’s Norlofts Resort on the shore in Hovland, Tor’s curiosity was ignited and he decided that one day he would captain a sea-going vessel. He never quite got there, but he did spend ten years in the US Navy and fished with one of Hovland’s commercial fishermen on the big lake.

During those youthful days in Hovland, he attended the daily happy hour at his uncle's resort. His uncle, John Sanger was a noted botanist and educator in addition to operating a North Shore resort. His happy hours featured characters of all stripes including academics and a cadre of North Shore fishermen and loggers. Many storytellers in the group, especially when the cocktails flowed, and Tor learned his skills for storytelling at the feet of some real masters.

As to what spurred his wanderings, Tor says,” I was wondering what my place is in the world. And wondering about other people in other places.”

Siffy says, “In my search for sacred landscapes and dark skies, I have explored the Himalayas, Sahara, Europe, Alaska, Patagonia, and lived in Madagascar where I served in the Peace Corps.”

She is a leading member of The Society of Women Geographers and the International Dark-Sky Association and its nearby affiliate Starry Skies North IDA. She is currently wrapping up work on a book about traveling in the footsteps of the adventurer, Annie Smith Peck, an American mountaineer and adventurer and suffragette who died in 1935.

Tor is finishing a book titled “A Year with Calvin Rutstrum.” Rutstrum was a renowned outdoorsman who wrote 15 books about living and thriving in the wilderness. In the 1920s he was a regular visitor/resident in the Hovland area, living and thriving in the bush. Tor says the book is a year of his personal reflections of the seasons and people in Hovland, inspired by the work of Rutstrom.

Siffy and Tor hold Lake Superior, Hovland, and the dark skies as sacred spaces. They settled in Hovland three years ago after Tor retired. At the time they had been living in Bavaria.

They are in the process of building a library and observatory on their Jack Pine Ridge property in Hovland. The deck for the observatory dome is in place and the dome should be up this summer. Siffy will offer guided celestial tours for visitors shortly after.

Also on the Ridge, Tor is constructing a trail that he is calling “Stations of Inspiration.” At waypoints along the trail, he is installing busts of significant historical figures with space for rest and contemplation. He is working with local sculptor John Franz to complete the 20 busts that are planned for the trail. So far, they have finished sculptures of Lao Tzu, Eric the Red, Black Elk, and Ernest Hemingway.

The couple also have a small publishing company, Sacred World Explorations. It can be found at www.sacredworldexplorations.com.