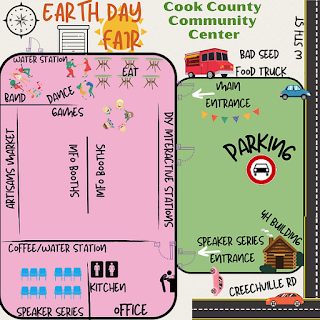 The Cook County Local Energy Project (CCLEP) is hosting its first Earth Day Fair on Friday, April 22 from 4:30 pm to 7:30 pm at the Cook County Community Center in Grand Marais. It is working with Cook County Climate Action,a faith based local group formed in 2021 and called to care for the environment.

The event is part of a statewide network of Earth Day events organized with the Minnesota Interfaith Power and Light, an organization that partners with faith communities around the state to, according to their website, “Build transformative power and bring the lights of people’s unique gifts to addressing the climate crisis.”

The Earth Day event will feature eight speakers on topics that include recycling, energy efficiency, and the City Climate Action Plan.

Interactive stations will be set up to include an Earth Day Photo booth, making your own reusable snack bag, Earth Day Games, face painting, and other family oriented activities.

Coffee and water will be available during the presentations. CCLEP asks you to bring your own cup or glass.

The Bad Seed Food Truck will be on hand. Again, the CCLEP asks you to bring your own tray and utensils to reduce the waste of single use utensils.

There is a full slate of music planned.  You’ll enjoy an hour with the Swing Band, 30 minutes with Fred Anderson, and 30 minutes with Dan Nelson & Friends.  Expect to find plenty of space to enjoy the music and get in a bit of dancing.​

CCLEP is a non-profit in Grand Marais formed to promote and facilitate the use of renewable energy and other energy conservation efforts in Cook County.

Its Project Coordinator, the first and only employee of CCLEP, is Kat Meyo. An energetic outdoors activist, Kat comes to the job after being a wilderness mountain guide in the Sierra Nevada mountains in California. She grew up near Akron, OH and graduated from Ohio University.

After graduation Kat worked for the non-profit Stephen A. Comunale, Jr. Family Cancer Foundation for a few years, working to help cancer patients and their families with financial needs. She went on to join Americorps doing environmental  conservation work.

Moving to Cook County in November of last year she sought a position that would allow her to serve the community the best she could.“ I wanted to work with people directly,” she added.

Volunteers are still needed to assist with this first Earth Day Fair. Interested folks should contact Kat at localenergy@boreal.org or 218-264-9318.