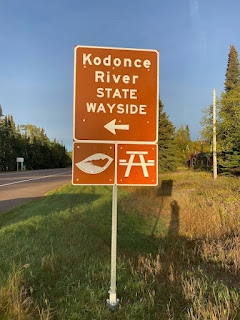 Last summer new signs sprouted on Highway 61 in Colvill, somewhere near mile marker 118, announcing the Kodonce River State Wayside just ahead. For long-time residents and visitors to this area, the site has been known as the Kadunce River State Wayside. But don’t be confused, it’s the same place and well worth a stop when you are driving up the shore.

According to the website www.minnesotaseasons.com the KADUNCE River was recorded with the US Board on Geographic Names (BGN) in 1941 (BGN is a Federal body created in 1890 to maintain uniform geographic name usage throughout the Federal Government.)

In 1947, the state government, perhaps asserting its independence from the Feds, changed the name to KODONCE River State Park (no one seems to know why). Then, in 1969 the park was downgraded to a State Wayside, but kept the spelling of KODONCE.

Maps and signs in the area, including the highway sign marking the river crossing, still spell the river as KADUNCE. A brief internet search shows that some folks believe a long-lost relative with the last name Kadunce visited the area early in the last century and the river must be named for him. 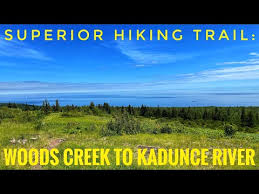 The Kadunce River begins at Trout Lake, runs through Scabbard Lake, and drains to Lake Superior through some spectacular canyons and waterfalls. The Superior Hiking Trail passes the river about three-quarters of a mile from the wayside.

You may be scratching your head a bit about the name change, but it’s a great place to visit. You can spend a minute reading the bronze plaque honoring Colonel Colvill, a civil war hero of sorts who had a homestead there.

If you happen to meet a Colvill resident while visiting, you can ask about the name change. For more fun, ask how to pronounce Colvill. Is it “Coal--ville?” or is “Caw-vil?” Or? Never an end to the fun of a Northshore visit.
Colvill East Cook County Northshore Journal