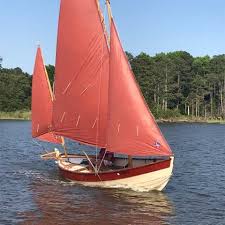 The boatbuilding tradition on Minnesota’s north shore continues in the capable hands of Mark Morgen in Grand Marais. Mark is building a 20-foot Caledonia Yawl in his shop this winter and plans to be sailing her by summer.

The style of the Caledonia Yawl, a popular design for sailors and amateur boatbuilders, comes from an inshore fishing boat common in the Shetland Islands of the North Atlantic, which in turn was developed from Norwegian open boats. Its double-ended, double masted style is distinctive.

Mark and his wife Carol moved to Grand Marais in the summer of 2017 after he retired from 3M. For more than ten years, the two of them visited Cook County as often as they could, enjoying the outdoors and the BWCA--Winter and Summer. When they thought about how much time they spent here Mark says, “We might as well live here.”

Unlike many retirees, the Morgens were not interested in a sunbelt retirement. “We are not heat people,” Mark said. “We didn’t want to move south.” Their hobbies include winter camping and ice fishing.

Mark and Carol were involved in scouting programs as their children grew up, and Mark’s woodshop was the logical place for scouts and leaders to build birdhouses, pinewood derby cars, and other crafts.

As happens, Mark and some of the other scout leaders became fast friends after years of working together. When scout days were done, they still got together regularly to embellish the old stories, tell a few new ones, and talk about what to do next. At one of those Saturday morning coffee gatherings, someone brought up the idea of building a canoe, and St. Croix Canoes was born.

“I’ve probably built more than 20 canoes, and a couple of kayaks,” Mark said. The fifth canoe he built, a solo, is on permanent display in Bearskin Lodge on the Gunflint Trail.

Mark has always wanted to sail, and about ten years ago he decided the Caledonia Yawl is the boat he would build to pursue that interest. It could be built with plywood and epoxy, materials he was familiar with from building canoes.

With retirement near, he signed up for an online boat building course, that focused on the step-by-step process of building the Yawl. This was a 40 part, weekly series, almost ten months long.

When the class was finished he bought the plans for the boat and was ready to build. Now, after retirement and living five years in Cook County, he is building his dream sailboat.

The Morgens built a home in Grand Marais and moved in July of 2017. Next to build was Mark’s shop for canoe building. He made sure it was big enough to build the yawl with doors wide enough to get it outside when it was done.

There is nothing on the boat that Mark won’t have made himself. He will craft the masts from Spruce. Since he makes his own packs, bags, and tarps for backwoods camping trips, he will cut and sew his own sails from material in a sail kit. He has even made custom clamps to support construction.

Mark says the boat will be finished in time to display at the wooden boat show at North House Folk School in Grand Marais this June.

The Morgens are active retirees and contributors to the Grand Marais community. In summer Mark operates a boat shuttle for Tuscarora Lodge and Canoe Outfitters on Round Lake, transporting BWCA visitors in and out. He’s an avid fisherman, winter and summer. The two of them snowshoe and cross country ski together in the winter, and pick blueberries in the summer.


Carol describes herself as a health coach, community builder, foodie queen, quilt artist, and Knit Wit. She became a health coach two years ago after losing 70# and now is helping others get through that struggle. Her quilting practice includes one of a few long arm quilting machines in the region and her creations are beautiful.

Mark is also a photographer and publishes a calendar each year with his best photos of the north shore region. You can find his calendar at www.lulu.com, search Mark Morgen.