North House Pauses to Engage With Community in Grand Marais 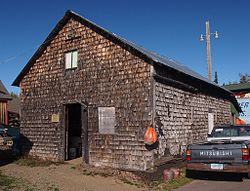 North House Folk School in Grand Marais was denied its petition for a setback variance it sought for a new classroom/workshop building it plans to construct on property it owns on the harbor waterfront. Asked what the next step is for the well-known folk school, Greg Wright, its Executive Director, said, “We’re taking a deliberate pause to engage with the community.”

Wright has planned public meetings for 9-10 am on Tuesday, April 19th and 26th and 7-8 pm on April 21st and 28th. The meetings will be held at the so-called North House green building at 505 West Highway 61.

“We are listening to concerns and questions people have about the waterfront for the future,” Wright said. He hopes the School’s neighbors will come to share their thoughts and review the drawings for the site. Following these meetings the school will consider how to proceed to gain the space it needs and decide how to proceed.

North House Folk School began on a shoestring in 1997 when a small group of classes were held in two garages on the main campus that were originally used by the United States Forest Service. The Service changed operations and abandoned the garages to the City of Grand Marais which granted North House a lease on the property. The school began and has thrived with its mission “to enrich lives and build community by teaching traditional northern crafts in a student-centered learning environment that inspires the hands, the heart and the mind.” It is internationally recognized for the quality of its programs, and has been used as a template for other Folk Schools in the Arrowhead region. 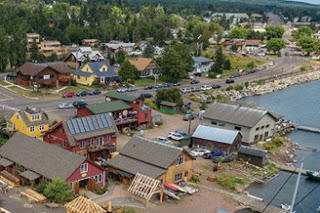 Last year it served more than 3,500 students with a profound effect on the local economy.

To accommodate anticipated growth, the school plans construction of a roughly 3,600 square foot building for future classes on property adjacent to the original campus that it acquired in 2018. “Quality classrooms bring our mission to life,” Wright said.

That property is known as the Dockside purchase and it contains two buildings on the shore, one of which is the historic Jim Scott fish house. Without specifics, North House intends to relocate and preserve the old Scott fish house.

When highway 61 was reconstructed over the past two summers, North House lost one of its entries and because of that, according to the school, access was restricted for deliveries, trash pickup, and snow removal. The current plan for the property would create a turn around area on the highway side of the planned structure.

Wright is hoping to hear a wide spectrum of local input at the upcoming meetings. “This is a place we love. A place we call home,” Wright said.
Northshore Journal