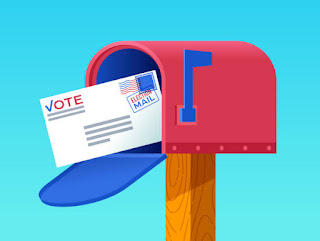 Politicians and their acolytes of a certain political stripe have portrayed mail ballots as the biggest threat to our republic since the Civil War. But Cook County MN shows that mail balloting is secure, accurate, increases voter engagement and turnout, and is more efficient.

Prior to 1996, Cook County had to create and maintain various polling places throughout this sprawling and sparsely populated region. A logistical challenge in finding enough election judges, suitable polling sites, and moving ballots securely to the county seat had county leaders seeking a better way. Looking to the State of Oregon, which went 100% to mail ballots, Cook County was ready to try it.

In 1996, Cook County held its first all-mail ballot election for voters living outside the City of Grand Marais. According to state law, if a city or township exceeds a voting population of 400, then in-person, onsite polling place(s) are required.

There were 4,197 registered voters living in Cook County for the general election in November of 2020. About a thousand of those living within the City of Grand Marais left more than 3,000 required to vote by mail. Vote-by-mail ballots may be sent through the postal service or dropped off at the County Courthouse prior to the close of balloting on Election Day.

According to Cook County Auditor/Treasurer Braidy Powers, who has been the county’s chief election officer for more than 20 years, voter turnout this year is expected to be 80% to as high as 88%. Nationally the turnout rate for the 2020 election, a presidential election year, was 62%. Cook County has an engaged electorate.

Cook County officials are right to be proud of that exceptional rate of voter turnout. “We believe mail balloting increased turnout, but there’s no (hard) proof that was the sole reason for higher numbers,” Powers said.

There have been no major disputes over mail ballots in Cook County, but elections are not without challenges. “We have had recounts of local elections, and once had a tie that was decided by a method of chance, as allowed in Minnesota statute,” Powers said.

The 2008 Minnesota Senate race between Al Franken and incumbent Norm Coleman ended in a virtual tie that required a statewide recount and Franken was not declared the winner until July of 2009. “The scrutiny of voting processes by attorneys for both candidates and other interested parties was extraordinary.  The process was validated as very few votes were changed statewide, and none in Cook County,” Powers said.

Cook County residents serve as poll workers and election judges. The county typically employs 50-55 Election Judges, about half for the in-person voting sites with the balance for organizing and counting the mail ballots. The Auditor's office provides training for the judges. In 2020 that training was moved online due to Covid.

On election day, the Auditor’s office directly supervises mail/absentee judges.  The judges work in teams to count particular precincts.  The size of teams varies based on the size of the precinct.

Mail ballots are only tabulated after the polls have closed in the city. Judges go through a series of steps to match the voter envelopes which show the voter's name and address with the precinct rosters the county provides.

“The rosters show the registered voters in each precinct.  Judges check off, for each envelope received, and verify the number of ballots received.  They do all of this before opening the envelopes and separating security envelopes that hold the ballots from the delivered envelope that show the name to keep voting secret,” Powers said.  This verification process produces the same validation level and voter secrecy as in-person polling places.

The Auditor’s office trains “head judges” to supervise in-person voting at polling sites in the city.

All ballots in Cook County are machine tabulated for regular state and federal elections. They are only hand-tabulated if the election is for one office or a single referendum issue.

In-person voting is scheduled to close at 8 pm on election day. Only then are ballots tabulated.

According to state law, only people directly engaged in the voting process are allowed onsite at polling places during voting hours. No campaigning is allowed in polling places. Authorized representatives of the Secretary of State or the County Auditor may be allowed on-site to observe processes or if they have some specific other purpose. The actual tabulating of ballots at the courthouse is open to the public for observation only.

Mail balloting may have its critics, but for the voting citizens of Cook County, and there are a lot of them, it works quite well.