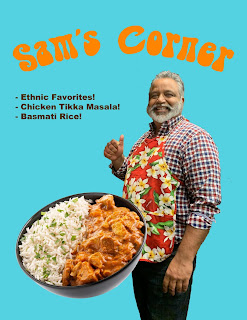 Sam’s Corner restaurant is now open (Fridays and Saturdays) inside the Marathon station/store in Grand Marais. Last Friday Sam introduced his Indian fare to local residents over the noon hour, serving up dozens of orders of Chicken Tikka Masala with Basmati rice, at no charge.

“I kept it mildly spiced on Friday,” said Satinder Sarabjit Bains, known to all Marathon patrons as Sam. “On Saturday I made half the batch spicier and I found out that people liked it.” Of course, he’d been advised that there is such a thing as Minnesota spicy, which is pretty mild.

Sam and his wife Sabby bought the Marathon location in January of this year from Craig and Lynn Schulte, the long-time owners of the business. “I looked at buying a number of gas stations around the midwest,” Sam said. None of the ones he looked at before the Grand Marais station were as well run as the Grand Marais location. “I was very impressed with the Schultes and what they built,” Sam said, having met them initially last September.

When they acquired the business, Sam told folks that he would have a food truck on-site by this Summer to serve Indian food. The staffing shortage situation on the North Shore has meant he’s spending more time on the gas station business than he could devote to a food truck, but since he promised customers he’d be serving Indian food he set aside a corner of the store, Sam’s Corner to fulfill his commitment.

Sam is from the Punjab region of India and immigrated to the United States in 1997, settling in northern California. He immediately went to work in a gas station and restaurant.

Sam could easily be nominated for an award as the hardest working entrepreneur. After becoming a chef and working in restaurants he obtained a Class 1 commercial driver's license and became a truck driver. Driving trucks, eventually as an owner/operator, he traveled throughout the US and Canada booking millions of miles over ten years. He came off the road and built a 40-truck fleet and brokerage business, specializing in the transport of fresh produce from the west coast to Minnesota and Manitoba with a terminal in Fargo, ND. In his spare time, he built three restaurant businesses in Pleasonton, Fremont, and Mountain View, CA.

He and his family still operate trucking businesses and restaurants although the trucking firm fleet is much reduced in size due to the effects of the Covid pandemic.

Sam is currently working 16-20 hour days at Marathon due to the staffing issues that plague the North Shore. But he’s keeping his word to provide Indian food to the residents and visitors of Grand Marais.

“We are very happy here,” Sam said. “The people here are so good. We love Grand Marais.”