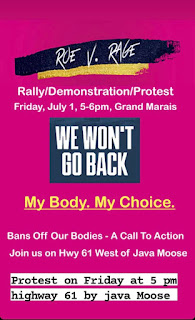 The recent Supreme Court decision that overturned the famous Roe vs Wade decision of fifty years ago has led to a number of protest gatherings around the country. A group of citizens of Grand Marais has organized a protest rally for today, July 1 at 5 pm at the intersection of Wisconsin Street with Highway 61.

Called “Roe v Rage,” the rally was arranged as a call to action. Dane Kufah, one of the organizers of the rally, says it came to be after a party last Friday at his house. About 15 people were there and the Roe decision became the topic of discussion. “We realized that all we could do is protest,” Kufah said.

Cheyenne Mcentee, another of the organizers said, “We all feel strongly about this decision and need to do something.” Mcentee speaks as someone with personal experience of abortion.

The organizers expect 30-40 people will stand with them during the protest. “Protest is empowering,” Kufah said.

Mcentee has lived in Cook County since 2015 and has her own business, Handy Babe Services. She offers cleaning services and will do painting and staining, and yard work.

Kufah moved to Cook County in 2020 and is a para-professional at Great Expectation School in Grand Marais and works a second job at Angry Trout restaurant on the harbor front.