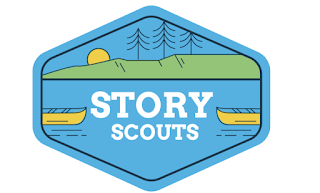 Visitors to Fisherman’s Picnic in Grand Marais this weekend will receive “The Awesome Story Scouts Star,” a 12-page newspaper put together by children in the community and published by Story Scouts. Story Scouts will have a booth at the Picnic.

The newspaper is edited by Sammie Garrity a high school senior who has been involved in children’s journalism since she was in fifth grade at Great Expectations school in Grand Marais. In 2017 she joined with Anne Brataas and Boreal Media, the longtime ISP in Cook County, to form the now dormant Boreal Corps, an online local journalism effort that included students from around the county reporting on issues important to them.

Sammie, who attends Mounds Park Academy in St. Paul, plans to pursue a journalism degree in college. She’s interested in long-form and print journalism and wants to focus on global issues. Ultimately she wants to, “Tell the stories of real people from around the world.”

Story Scouts is an entrepreneurial publishing club set up by Minnesota Children’s Press founder Anne Brataas. From the Story Scouts website, “We interview, research, write, illustrate, edit, design, craft, proof, sign off, and publish stories from a child's eye view to offer a fresh, clear, truthful perspective on the world around us.”

Anne, who titles herself Chief Curiosity Officer, first discovered Grand Marais as a young journalist at the Duluth News Tribune. It was the time of the Congdon murder case and the conversion of a part of Cook County into the Boundary Waters Canoe Area Wilderness (BWCA). With two major news stories going on over an extended period of time for the newsroom, Anne was sent up the shore to Cook County to cover local reaction to the BWCA, and much of that reaction was negative. While there, she fell in love with Grand Marais. “I was attracted to the spirit of place,” she says. “So I put a pin in it.”

In the coming years, she and her family visited often, even camping in the BWCA.

Anne’s career in journalism eventually took her to the St. Paul Pioneer Press. While there, she earned a Master’s degree in Zoology from the University of Minnesota and a Master’s degree in Environmental Science from Miami University in Ohio. She started The Story Laboratory as a consulting practice specializing in science communications and learning.

In 2016, after her children had gone off to college, she and her husband Charles (Chico) Hathaway rented a house in Grand Marais. Anne could operate Story Laboratory from her rented house, thanks to access to the high-speed internet services in Cook County.

At the time, Boreal was transforming itself into a news aggregator and email provider and she helped get Boreal Corps off the ground. “I eventually left Boreal because I wanted to do more with the kids,” Anne said.

Anne is an energetic advocate for science education who sees hope in the generations coming up. “We have a character crisis in this country,” she said. “I want to help build confidence and character in our young people in Cook County.”

The Press is located in the Songbird Suites Building in Grand Marais (site of the former Harbor House Restaurant), its first formal facility. Anne says she secured this space, overlooking the harbor in Grand Marais, to provide classroom and outdoor space for Story Scouts.

“The deck is a huge space for outdoor meetings,” she said, an especially important feature for this pandemic reality.

In addition to the Story Scouts newspapers, published in print and online, Anne is creating, with the Scouts, a five-book series titled “Childs Eye History: 200 Years of Cook County History.” Her students are doing the research and interviewing the elders as they learn to use current communication and technology skills.

“We’re learning while we’re doing, and having a blast,” Anne says.

Sammie says of Anne, “People don’t realize how hard she works. She doesn’t get the appreciation she deserves.”

Retired from his engineering day job, Chico has moved to Grand Marais and they recently bought a house, near where they were renting.

Anne and Chico have two sons, Kip Hathaway, 27, and Aaron Hathaway, 26. Both have taught classes with Story Scouts. Kip is an illustration mentor and improv comedian living in the Twin Cities. Aaron majored in Journalism and Danish and now lives in Copenhagen, Denmark where he edits and writes for a family-oriented blog.

Anne and Chico are happy immigrants to Cook County and have jumped into community activities. Both are lifeguards at the YMCA swimming pool.

Anne says her goal is, “To prepare the children of Cook County to be super confident and have choices in their life.”

Information on activities, and how you can support the program, are at www.storyscouts.org. Or call 218-387-5666.