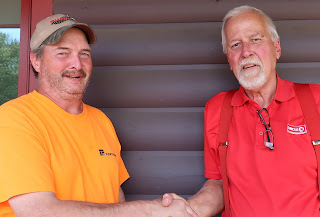 On a Thursday afternoon in August, Scott Benolken and I met at the radio station WTIP in Grand Marais to record a StoryCorps One Small Step conversation. Strangers to that point, Scott and I had applied online to participate in the One Small Step program earlier this summer.

WTIP is one of six hub radio stations across the country that are recording these conversations. The conversations are intended to bring together two people with potentially differing political and social views, and through directed questions create a discussion, not a debate, that brings out their life experiences and shared values. One Small Step seeks to move people beyond partisan and ideological labels and converse about the life experiences that shape how we each see our world.

Applicants may request a conversation partner they already know. Most, like Scott and me, had not met before and were paired by the WTIP One Small Step Project Manager Barbara Jean Meyers. The pairings are like, “a puzzle to put together,” Meyers said. She looks at the guidance she received during One Small Step training for facilitators. “I’m looking for differences of course, but also areas of common ground.”

For instance, she looked at the applications for our pairing and found that Scott and I had both chosen to live here, we are engaged in various ways in the community, and we both were raised and lived in other places.

Sometimes, the final pairing just comes down to who is available at the same time.

Meyers, a former News Director at WTIP with more than 20 years of broadcast experience, serves as the facilitator of the discussions. She greeted Scott and me at the front door and escorted us to the conference room which was set up with microphones on opposite sides of the table. The four kick-off questions for participants to ask each other were laid out on the table along with the short bio each of us had written on the application.

The four conversation starters are about why we want to do the interview, the bio each of us submitted, the one or two people in our life who influenced us most, and a description of our personal political values.

Once the 50-minute conversations begin, Meyers fades into the background, only adding a written question if needed to keep participants talking. “The conversation is up to the participants,” she said.

In our case, toward the end of the conversation, Meyers brought in the question, “What does it mean to you to be a North Shore resident?”

When I read him the question, Scott paused before answering. “You can be a resident anywhere,” he said. “Being a resident is one thing, being a community member is 100% different.”

Scott is an active community member. He highlighted his participation in the Lions Club and Sons of the American Legion, both community-based service organizations. His philosophy is, “I can’t help you without helping myself too.”

Segments of recent conversations were presented on a WTIP news story that featured an interview with Meyers. That story can be heard at WTIP.org.

Meyers was inspired by Story Corps founder Dave Isay when she heard a piece he reported and produced for National Public Radio called “Ghetto Life 101,” while she was a student in high school. She began working right away at KFAI in Minneapolis, producing two documentaries for broadcast while still in school. She went on to complete college with a major in community radio broadcasting.

The full recordings of the One Small Step conversations, with the approval of the participants, will be archived at The American Folklife Center at the US Library of Congress. For me, having my conversation recorded for future generations was part of the appeal of participating. They are also archived at Story Corps and WTIP. If the participants choose, the recordings can be erased--never to be heard again.

“I’ve been learning a lot, just being a fly on the wall,” Meyers said. “Everyone wants their neighbors and family to do well and everyone cares a lot bout our community and country.”

This is the fourth year that Story Corps is conducting the One Small Step program. WTIP is one of the smaller public radio stations to have been chosen to participate.

Meyers hopes to produce a finale of sorts to wrap up the program, celebrate its completion, and provide a listening session for the community. Look for that early in 2023.

In the meantime, Meyers is still taking applications from potential participants at the website WTIP.org “The more people we have, the more conversations we can do,” Meyers said. You can also reach her at 218-387-1010.