By Steve Fernlund November 21, 2022
Ron Engler of Grand Marais, who writes under the pen name Christopher Eng, wrote a book of poetry titled “The Old Man’s Poet.” It was published last year by Dorrance Publishing. His second book of poems is currently in production at the publisher. 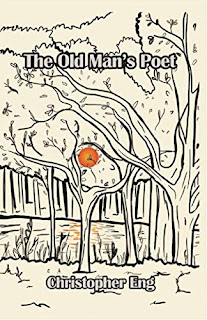 Engler is a vigorous 82-year-old veteran born in St. Paul, MN. He served eight years in the US Navy. Next, he served with the US Marines, spending 13 years in Vietnam and then13 years in Japan.

Before settling in Grand Marais in 2016, Engler traveled for 15 years throughout the western United States. This book is the culmination of his observations during those travels and visits here on the North Shore.

Engler received his BS degree at West Texas State in Canyon, TX, and an MS degree from Baylor University in Waco, TX.

“I was told by my professors back then that I could write poetry,” Engler said. “I made a couple of attempts but not really seriously until I was traveling.”

Engler shared some of his poetry with someone at the Grand Marais Library after he settled there and that person urged him to publish his work. Here is one of the poems from “The Old Man’s Poet:”

Need this meal, sinew, strong rumble, belly down below.

It broke surface in my pan, fire hot and a ready hand.

Engler says that he believes expressing himself was often difficult, saying that the words were floating around his head with no outlet. He found poetry to be a way of expressing those words and sharing his thoughts and observations with others.

When not out in the wild country of the North Shore, Engler works for the Grand Portage Lodge and Casino.

“The Old Man’s Poet” is available from the Dorrance Publishing website bookstore, Amazon, or your favorite bookseller.