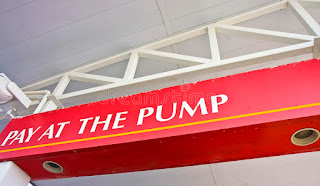 Drive-offs are a form of theft where motorists intentionally drive away without paying for the fuel they pumped into their vehicle. Often times they may just have forgotten to pay inside. Other times, the theft is intentional and the driver leaves the station in a hurry, threatening the well-being of bystanders or retail staff with dangerous driving.

In 2008 the Canadian province of British Columbia instituted a regulation called Grant’s Law mandating that all fuel retailers make customers prepay at the register inside or pay with a credit/debit card at the pump. The regulation was passed three years after a teenage employee at a gas station named Grant DePatie was killed by a driver who was running off after putting $12 worth of gas in his car. Grant had run out of the store to get the license number of the car when he was struck and dragged several kilometers.

The City of Coon Rapids, MN passed an ordinance in the summer of 2012 requiring fuel retailers to have a pay-at-the-pump or prepay policy because of the cost of law enforcement needed to pursue drive-off perpetrators.

The drive-off problem is a significant expense for gasoline retailers, estimated to be several thousand dollars per store. When a patron pushes a “Pay Inside” button on the pump, a signal is sent to the store where a cashier will look out to verify the pump, vehicle, and driver and then authorize the pump to dispense fuel. That cashier will keep an eye on the pump and see that the customer comes inside. Since the cashier has other responsibilities to other customers, let’s say counting out $7.68 in pennies, nickels, and dimes that a customer is using to pay for coffee and a snack, it becomes easy to lose track of the pumps.

To cut down on financial losses and increase the safety of patrons, all Kwik Trip stores, including the one in Two Harbors, require patrons to use the payment system at the pump with a credit or debit card or come into the store and pre-pay for their gas before returning to the pump. This policy was instituted in January of this year.

According to India Peterson, Assistant Store Leader of the Kwik Trip in Two Harbors, “I don’t think we will ever go back to pumping gas before you pay.”

Peterson says the most frequent issues they’ve had since instituting the policy relate to explaining to customers how the prepay system works and dealing with a patron’s credit card not working at the pumps. India says that she and her staff work hard to help customers cope with the new policy, even now. “We try to help wherever we can,” she said.

Donna Nichols, manager of the Holiday Stationstore in Beaver Bay, MN says that they have no plans to change their pay inside after the pumping policy. “We had a few drive-off problems after gas rose above $4/gallon,” she said. But being in close proximity to the pumps means they can easily monitor customer activity.

In July of this year, Orton’s Holiday in Moorhead took the opposite approach and instituted a prepay or pay-at-the-pump policy after losing $3,500 in May and almost $4,000 in June to drive-offs. They contemplated this policy for a long time and worried about inconveniencing their best customers, the ones who paid for what they pumped. But they finally decided to change the policy to minimize drive-offs.

Self-service fueling started in 1964 at a convenience store in Westminster, CO. Self-service fueling meant retailers could sell more gasoline with less staff needed to operate the pumps. By the mid-80s, retailers began pay-at-the-pump programs although it would take many more years before pumps were automated to receive credit and debit card payments. As the technology improved, making credit card processing more accessible and efficient, stations continued to allow a “Pay Inside” feature to allow patrons to pump their gas and come inside to pay--and patronize the retail business. The current pay-at-the-pump systems are a reliable alternative to prepaying.

Some stations, like the Holiday on the west side of Two Harbors, communicate with patrons who are fueling with an intercom. It may be one reason why they don’t have a big problem with drive-offs.

Two states, New Jersey and Oregon haven’t allowed self-service fueling for more than 70 years. The current average price of regular gas in New Jersey is $3.74 according to AAA and in Oregon, it is $4.46.

Especially in urban and tourist areas around the country, it looks like the pay-after-pumping system is fading away. None too soon for the small business operators who have been losing big money from drive-offs, whether intentional or not.