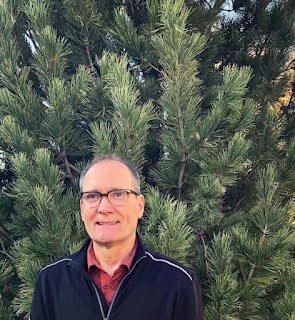 John Jacobson’s custom-made knives are finding collectors, and knife users, from family and friends to the general public. A mushroom forager, John’s knife-making began with creating his own foraging knives and then he added filet knives.

John, a retired logistics executive, and his wife Lou Ann have a home in Minneapolis and they have owned property in rural Hovland for more than 20 years. They are committed part-time residents of Cook County and are well known for their community-building efforts, from helping build the addition to Trinity Lutheran Church to baking bread they share with friends and neighbors.

Last year, Peter Lewis, an artist in glass, encouraged John to submit a dozen or so of his knives for an exhibition titled “Wood Glass & Steel” at the Art Loft located in Boreal Gifts & Goods in St.Paul that was held this fall. John submitted 16 knives that he’d made, and 11 were sold before the exhibition ended last month. 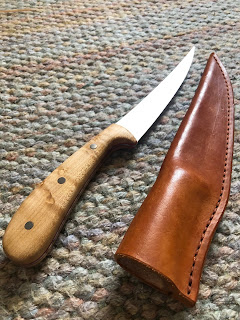 Boreal Knives are Scandinavian-styled. John builds them with European blades and uses material from the boreal forests for the handles. The knives receive handles made with wood from Spruce and Bird’s Eye Maple to Oak and Birch. He also makes handles from stacked leather and birch bark. He colors, forms, and stitches custom leather sheaths made specifically for each knife.

Asked when his knife-making got serious, John said, “A mushroom hunt a few years ago started it all.” He and Lou Ann had been out searching for Morels that Spring. When they returned to the Hovland Homestead after a successful hunt, John went into the shed to return his tools before they headed to Minneapolis. There he saw a cherished hatchet he’d acquired years before that had a stacked leather handle. That’s when he wondered if he could use stacked birch bark to make a handle for his foraging knife.

“Lou Ann drove home,” John said, “And I went on the internet on my phone to research birch bark 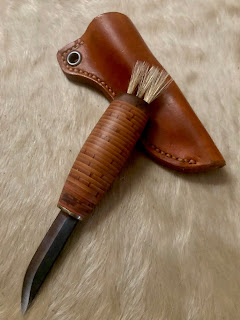 handles. Turns out it was not an original idea and was used extensively in Finland.”

John dove into learning how to find and use birch bark to make his stacked handles. He currently harvests birch bark, sustainably, in Cook County. After designating areas for timber harvesting, the USFS issues John a permit to harvest his bark in stands that will be cut in the coming winter.

John doesn’t go lightly into his hobbies. As noted earlier he is known in the Hovland area for his bread-making skills.

”I started baking bread in college, but I failed miserably,” he said.

In 2006, John was faced with a six-month sabbatical when the company he worked for was in a major transition. He heard an interview on MPR with world-renowned baker Solveig Tofte, owner of Sun Street Breads in Minneapolis. Not knowing what to expect, John reached out to Tofte, introduced himself, and asked if he could work for her, even if just sweeping floors, so he could learn more about the art of baking bread. She not only encouraged him but suggested he join a class she was starting for aspiring bakers. This led to him joining the Bread Bakers Guild of America where he was able to pick the brains of some of the best bread bakers in the country.

John says he still bakes every week, but not as much for personal consumption. “I cross-country ski less than I used to,” he said. “My metabolism isn’t what it used to be.”

This writer got to know John just a few years after his college and failed bread-baking years. We worked for the same company. He was serious about his hobbies even then.

He made a red-hot chili and entered and won chili cookoff contests around the Twin Cities.

A native of Wisconsin, John had a hobby of tormenting his Twin Cities colleagues with his passionate feelings for his beloved Green Bay Packers--all in good fun.

You could also see him with a fly-tying vise on his desk where downtime and after-hours left him time to create his own flies. He was and is an avid fisherman, even building his own rods.

Added to that he was much fitter than his sedentary co-workers. He’s spent a lifetime riding bicycles far and fast while cross-country skiing at near-professional levels.

Skill and artisanship are evident in John’s knives. Asked if he should be considered an artist or a craftsman, John modestly says, “I consider these my hobby.”