The Outpost Motel is a Mom & Pop With a Loyal Following 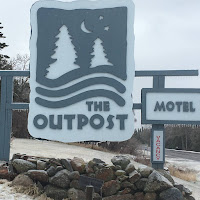 The Outpost Motel in the unincorporated town of Colvill started in 1952 as the Moe-Del Motel, named after its founders. The motel sits on 18 acres of primarily wooded land bordered by USFS forest to the north and Lake Superior to the south.
Current owners, and self-proclaimed Mom and Pop operators, are Holly Johnson and Todd Zins.

They were long-time visitors to the North Shore, from Duluth to Thunder Bay, during the 27 years prior to buying The Outpost. Like many people living in the Twin Cities who visit the Lake, Holly and Todd thought they would move to a North Shore home after retirement.

Todd, a carpenter, and Holly, a property management specialist, decided in 2016 that they could make the move to the Shore well before retiring if they could find a place to live and work that was within their budget.

They found a small resort on the shore near Two Harbors that was for sale and made an offer. The price was a bit higher than they wanted so they thought that one of them would need a job off the property. By September, this deal fell through, and the disappointed couple regrouped. They found a listing online for The Outpost and planned a visit there over Halloween in 2016. Holly said, “It was super cute and in a fantastic location.”

By the middle of January the following year, Todd and Holly had quit their jobs, sold their Twin Cities residence, and taken over The Outpost. Almost six years later, the couple is as excited about the motel as they were on day one.

“We’re so lucky,’ Holly said. “Our guests are smart, thoughtful, and wonderful people and we feel that some have become friends.”

The Outpost has a loyal following of regular guests. Reading comments from guests on social media it is evident that travelers find the cleanliness and peacefulness to be the icing on the cake of being perched on the small hill above Lake Superior.

“Some of our guests have been coming here every year, for 40 years or more,” Holly said.

The motel offers 14 units for rent, each with expansive views of Lake Superior. A second-floor apartment unit in a separate building offers a full kitchen, a bedroom with two queen beds, and a living/dining area with Lake view at the front and forest views to the rear. They also have kitchenettes in some of the rooms. In a nod to Holly’s daily social media posts, each unit has high-speed internet

“I’m excited when first-time visitors to the shore stay with us,” Holly said. The couple has prepared a comprehensive binder for each unit that is filled with the history of the area along with all the things to do in Cook County.

Otis the Moose, a pocket-size moose, is available for guests in each room. It comes with a note that says:

This is Otis. He is yours to keep and take with you on your travels. There is an old wives' tale that has been handed down that speaks of the good luck you will receive if you carry a tiny moose in your pocket. OK. We made that up. But we think Otis is cute and could possibly bring you good luck. What if we are right? You wouldn’t want to risk it, would you? Take good care of Otis. 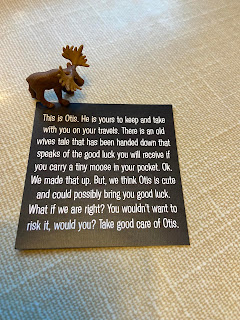 Otis is part of the fun-loving spirit that Holly and Todd bring to their business. They’ve received pictures of Otis at airport bars around the world and he even visited the Vatican once.

On the inland side of the property, Todd has been attracting and sharing food with deer and chipmunks. He says that the deer start to show up as guests are arriving for check-in.

“Todd is our Disney Princess,” Holly said. “The deer and the chipmunks flock to him.”

Thinking and reading are encouraged at The Outpost. They have a small library in the office for guests. In lieu of the standard nightstand Gideon Bible, The Outpost features a paperback copy of George Orwell’s cautionary tale, “1984.” 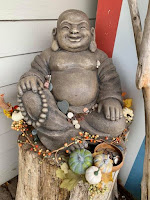 A statue of a smiling Buddha stands sentinel at the entrance to The Outpost Office. He has even managed to attract offerings from motivated guests.

Buddhist Prayer Flags flutter above the entrance to the trail that leads from The Outpost to the Superior Hiking Trail.

With commuting in the metro a distant memory for them, Todd and Holly want their guests to experience a peaceful and therapeutic stay on the North Shore.

Holly promotes The Outpost, and communicates with guests, daily on their Facebook page. Availability and prices can be found at www.outpostmotel.com or by phone at 218-387-1833.