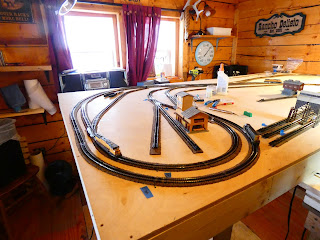 Big Bear Lodge and Cabins on Poplar Lake, up the Gunflint Trail, operates a reduced season in winter with only three cabins in use. “It gives us time for ourselves,” said owner Andy DeLisi.

Not one to enjoy just sitting around, and unable to do resort maintenance and construction during the winter, Andy decided he had to come up with a hobby. Ice fishing was off the table, so he is building a Northshore themed model railroad layout in an old outbuilding on the property.

As the 2021 resort season came to an end this fall Andy spent some time repurposing a small building on the property that was originally built in 1935. “We really have not used it for any real reason for the 10 years we have owned the place,” Andy said. They referred to it as “The Shack” or “The Curmudgeon Cabin.”

Andy now considers it “Andy’s Hobby Shack/2nd heated workshop/man-cave/all-around cool shanty.” Consistent with it being a “Hobby Shack,” DeLisi says it is, “Perfect for a model train area.”

Andy and Ida DeLisi acquired Big Bear in October of 2011 after working together in the family wholesale produce business in the Twin Cities. Andy was involved in all aspects of the family business, from transportation and logistics to marketing and sales. A high-stress, 24/7 business, the Delisis were looking to slow life down a bit. Recreation in the Gunflint Trail area eventually lead them to decide a business and home here was what they wanted.

They bought the Old Northwoods Lodge on Poplar Lake. It was a struggling property that had been foreclosed on in 2011. Andy and Ida spent three-plus years rehabilitating the resort. “We hauled off at least ten 30-yard rolloffs of stuff off the property,” Andy said.

They completely renovated the lodge and the cabins. They now consider Big Bear to be an old-school resort with unique and charming cabins that have all the modern amenities for the 21st-century vacationer.

Andy started his model railroading hobby in the mid-90s. He built a rudimentary layout in his basement and began acquiring N Scale locomotives, rail cars, and tracks. “I ended up moving from that house and never kept up with the hobby after that,” Andy said.

But he kept his collection of some 20-30 locomotives, various cars, wiring, and track, which gave him a jump start on the layout he’s building now. 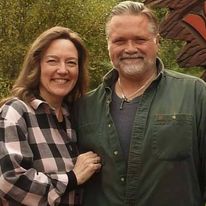 The layout will include equipment, buildings, and scenery for the three industries important to the North Shore and railroading. Lumber, mining, and fresh produce. Expect a model of a produce warehouse with rail siding in the final product.

Andy doesn’t have any plans for publicly displaying his layout after it’s done. “I’m not sure of how much interest others will have,” he says. “I did this mostly for myself.” Although he is hoping his three grandchildren will show an interest in it.

The benchwork is done, the track is laid, and some structures are assembled. Next comes landscape and scenery.

“This has been a cool learning experience,” Andy said.

Big Bear Lodge and Cabins is online at http://www.bigbearlodgemn.com/ and on Facebook.
Gunflint Trail Northshore Journal